Imagine that you work hard, maybe an eleven hours day at a farm – yet you cannot afford to feed your children? The right to a proper livelihood is crucial for you, your family and your community to function. Related to these questions are those about how we consume in different parts of the world, and how we use our soil and care for our climate.

“The first free elections in 1994, was also the first time ever that we farm workers had any rights. 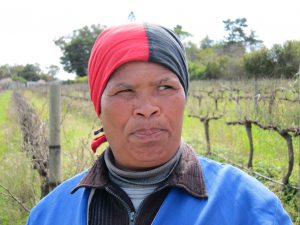 Then we were allowed to vote, says Sarah Claasen who works on a farm close to Stellenbosch in South Africa.

But we still live under hard conditions in many farms. The laws are good, but the reality is hard. ”

The workers who produce the wine you drink from Chile, Argentina and South Africa often live in poverty. Their monthly salary is not enough for food, school fees, electricity and medicine. Working days can be up to 12 hours, six days a week without access to toilets or clean water. Female workers often only get seasonal employment and, despite equal work, they earn less than men.
Read more

In South Africa, the housing for the workers is often provided by the vine farm, and the housing is connected to the full time employed man in the house . If the man loses his job, the whole family will be forced to leave their home. It also occurs that women who are seasonal workers are fired if they become pregnant or denied the opportunity to return to work after they have given birth. Another problem is racist attitudes and harassment by employers.

The “Ethical Wine Trade Campaign” consists of trade unions and organizations in South Africa, Chile, Argentina and Sweden. Afrikagrupperna is one of the Swedish organizations active in the campaign. We demand that Systembolaget, the Swedish state and Swedish wine import companies take responsibility for the environment and human rights throughout the entire production chain of wine. Read more

The campaign demands that Systembolaget should take responsibility for, and make sure that their suppliers pay wages that the worker can survive on. They should also take responsibility for ensuring that labour law is respected for all workers involved in wine production, including female seasonal workers and migrant workers from subcontractors.

A first step is to listen to and engage in dialogue with farm workers’ organizations about what improvements they want to see. Farm workers should become central advisors in Systembolagets ethical work. There should also be an instance where workers can report maladministration without risking his or her position.

The campaign also suggests that Systembolaget should investigate the possibility of signing a global framework agreement with the International Trade Union, IUF. An important issue for the campaign is that those who produce the value of wine take part in the profit in terms of better wages and working conditions.

A study conducted by Afrikagrupperna in 2012 shows that up to 80 percent of the value of large-scale South African box wine stays in Sweden through taxes and VAT, the winery worker’s salary is less than 3 percent of the value. We therefore consider that the Swedish state has a major responsibility for improving the conditions for wine production.

With the Ethical Wine Trade Campaign we want:

• Attention and awareness raising targeting consumers about the unfair working conditions for farm workers in the wine industry, including salaries that can sustain a proper livelihood.

• Put pressure on Systembolaget and Swedish wine importers to invest the resources needed to ensure sharper working conditions in the wine sector.

• Ensure that farm workers and their trade unions are involved in the system company’s ethical work.

Right to a living wage

Many workers work paid under the table, which means they do not have access to sickness compensation, retirement or parental leave. It is also common for farm workers to work 2-3 months a year and therefore very few join the trade unions. Those who join are often blacklisted and persecuted, leaving many to refrain from organizing themselves. Read more

Proeblems regarding land and environment

Another problem is that when the wine industry expands, small farmers and indigenous peoples are forced to move to areas far away from the land they have traditionally used. Landgrabbing as it is called is a major problem in, for example, Argentina where wine production also led to water shortages for nearby villages.

The (g)rape of South Africa – A call for solidarity

The (g)rape of South Africa – A call for solidarity is a project by two students who took the course  “Leadership for a sustainable world” at Röda Korsets folkhögskola in Sweden.

Farm workers from Chile, Argentina and South Africa met in Cape Town to discuss their situation and the way forward. Meet some of them in Leandro Martins interviews.

Visit our youtube channel for more videos!
Take a look at our Upcoming events


Warning: count(): Parameter must be an array or an object that implements Countable in /home/u/u0908412/www/english/wp-content/themes/jupiter-child/footer.php on line 244